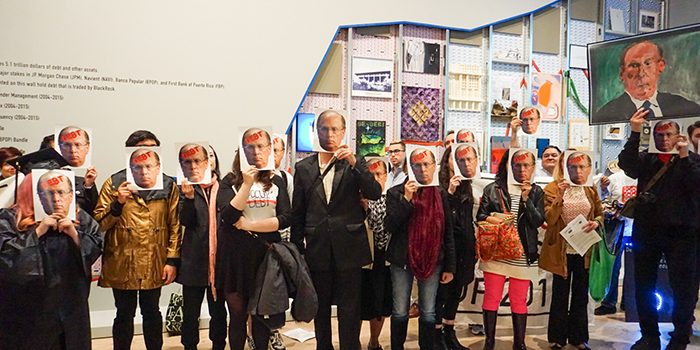 Please join us for this autonomous event

What does commencement mean for artists in the billionaire feeding frenzy of the Trump era? Commencement symbolizes the entry of studied, curious individuals into a world that they have been prepared to influence and impact. But what is this world into which graduates are entering today, and what impact can they have amid a reactionary crackdown on art and cultural difference, saddled with backbreaking amounts of debt? These are the questions that tens of thousands of new art school graduates and hundreds of thousands of American artists are asking this spring. We cannot accept what appears to be offered: A mass competition for the few available court painter positions as democracy unravels and less privileged citizens come under threat.

This is a painful moment. We are caught between the clubs of budding Fascism and the nearly inescapable glass grip of Financialization. For most artists, echoing much of the US workforce, the price of entry into the Art World is massive debt. That means an intimate and legally disempowered relationship with financial corporations like JP Morgan Chase, Banco Popular, and Navient Corporation that work against their borrowers while enriching the 1%.

In this moment, as this system reaches a fever pitch, we propose a Counter-Commencement Debtors Ceremony at the Whitney Museum. A community of artists usually invisible to the museum will step out of the shadows and attempt to claim their place in and democratize the museum. This is an unsanctioned action related to a platform called Debtfair, which is currently installed in the museum.

The economic contrasts stemming from class division among artists in the US will be on full display on May 5. May 5 is the first day of Frieze Art Fair: the pop-up luxury enclave on Randall’s Island that is Bloomberg’s vision for New York come-to-life as a million dollar minute of the city’s cultural clock. The work in Frieze is supposed to be valuable. We say that this value is predicated on the majority of art being framed as surplus.

Debt manifestos at the Counter-Commencement Ceremony will include representatives of students currently on strike in Puerto Rico, artists caught in debt spirals promoted by Chase Bank and Navient Corporation, and a manifesto from the 2018 class of Columbia University––one of the schools most heavily represented among artists of the Biennial and a pipeline into the Art World. The current cost of obtaining an MFA at Columbia University is nearly $60,000 per year for tuition alone.

Occupy Museums has asked nearly 9,000 visitors to the Whitney Museum: Are there conditions under which you would support a debt strike to demand better deals from the banks?

Resistance against Trump depends on a Debt Justice Movement.

Since 2008, the upward mobility of the middle classes, known as the American Dream, has fallen into rubble. But it was already known that the Dream never was close to a universal reality because the slave economy that built this nation did not care about the dreams and financialized the lives of many Americans, and not much has changed today. Today, neoliberalism, slavery’s economic heir, continues the logic of extraction. Union jobs were retooled as precarious work, funneling profits directly into Silicon Valley and Wall Street. This is the world into which students are graduating in 2017.

But now the hour seems almost too late to call out neoliberalism. Recently, we’ve seen a political turn toward hyper capitalistic nationalism that has found an even more cynical use for the American Dream: It is wielded as rhetorical entitlement deserved only by white Americans, an entitlement that can be disbursed only when large populations who are not white are variously forgotten, targeted, ejected, killed. The American Dream today is a wedge used to divide, confuse, and enrage people, obscuring a quiet counter-revolution that is taking shape as a takeover of all levers of power by billionaires. Their usurpation of power depends on the withering away of democratic institutions such as schools and libraries. The Art World is a comfort zone for many of these billionaires. This is the counter-revolution of the Collector Class.

The Collector Class seeks the wholescale annexation of our space and time. They are remaking neighborhoods into branded real estate-culture packages. The high-tech debt-based economy converts people’s time into fixed-income assets. All of this becomes capital whose form can only flow up to the top of the pyramid. In this equation, art that does not perform the function of luxury asset gets weeded out. Yet artists and institutions are beginning to resist.

·      More than a trillion dollars of student debt––a sum that now largely powers the US economy and a sum that is harvested through banks, hedge funds, and asset managers such as Blackrock, Inc.––a largely unknown firm larger than the World bank––to become dynastic wealth for billionaires extracted from the future time of a new generation.

·      An era of renewed deregulation, wherein many have been and will continue to be led into debt spirals and potential lifelong financial disempowerment by “reputable” corporations, like Navient Corporation, who are securitized by taxpayer money.

·      A re-colonization of territories through economic means as seen in cuts to universities in Puerto Rico as a result of the austerity measures in the Promesa Bill.

On the table are: Debt strikes, a reformulation of institutions …to be given voice at the museum on May 5th.

Time to Re-Commence the Struggle.