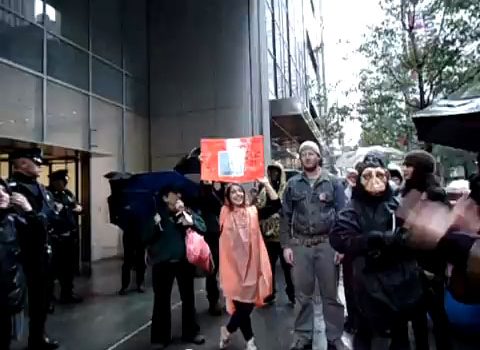 For the second action, we re-occupied MoMA holding a “Bring Your Own Manifesto (BYOM) assembly, and formed alliances with Teamsters Local 814 who had been locked out of their art handling jobs at Sotheby’s. The teamsters brought flyers tying MoMA board members and donors to Sotheby’s. This time, rather than being met by MoMA directors, we were greeted by the NYPD and their barricades. After the police demanded that we protest within a steel pen off of the sidewalk and away from MoMA’s main entrance, the General Assembly facilitator refused to speak to the police unless they used the people’s mic. Thus the group was empowered to talk to the police as a whole. Needless to say, it did not give consensus on the proposal to enter the police pen. We demanded that the police explain the rules of public space in front of the museum through the GA format. As it was legal to be there (we now know that the NYPD does not encourage people to excercize or know their legal rights), we held our ground, and continued our assembly.  Manifestos were read about the abuse of unpaid intern labor in galleries and museums, an Irish revolutionary song was sung, and a ballet was danced (toe shoes and all). After everyone had read their manifestos, we  headed to Sotheby’s to join the picket line of the Teamsters Local 814 in the freezing cold rain.

Meet at 2:30 PM, Liberty Square, for an information-sharing assembly (under red sculpture) OR meet at 4:00 PM at MoMA.
We will be joined by the Art Handler’s Union, Teamsters Local 814, who have been locked out of their Sotheby’s union jobs for over three months now. Following Occupy Museums, we will march to the Teamsters’ picket line at the Sotheby’s evening auction, which starts at 6:00 PM on 1334 York Avenue.

Occupy Museums and the Teamsters Local 814 stand together in solidarity!

Please join us and to bring your own manifestos (BYOM), to read in the General Assembly at the doors of the museum! Please keep them short- 3 minutes max so that everyone can participate. For this action

we are moving away from the voice of a sole author to a collective voice. We welcome all to be part of our assembly and let your voices be heard!

What is Occupy Museums?

We are artists, art lovers, and art workers! We live and love art and are committed to its growth. However, we see many museums in their current manifestations as key elements of a larger system whose funding structure and relationship to the market, disempowers artists, and alienates art from the 99%. Value is manufactured by false scarcity, propped up by the cult of celebrity and the parlor game of speculation. This undermines the potential power of art to be a much greater force in our society.

We believe that to Occupy is to claim space for dialog and transparency through the physical presence of our bodies. It is to hold space that was previously inaccessible. As Occupiers, we bring the General Assembly to the doors of the museum, to engage in a dialog about the relationships between the arts and capitalism.

This is only the beginning.

At its core, the Occupy Movement is about imagining and building a just and democratic future. It is generative not destructive. We are shifting collective consciousness. We are here to envision what the museum can be, what art can be, and how we can create a society that works for the 100%.