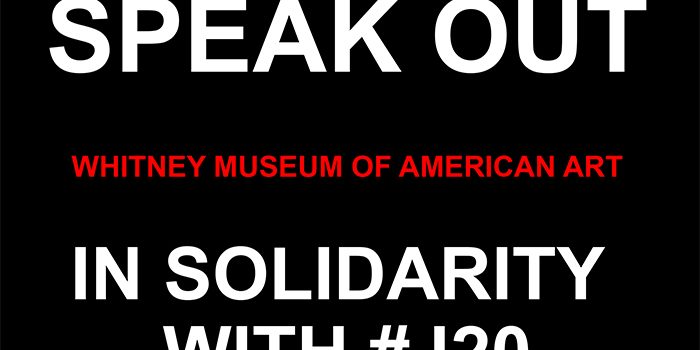 After this event, stay with us for actions, an assembly, and out onto the streets organized by #J20 planners.

January 20th is not a day for business as usual. It is a day of reckoning: a day when we must step back stand together and acknowledge how far we have fallen from the values that we supposedly uphold as individuals, communities, and institutions. At the same time, however, we must recognize that this occasion is exactly business as usual in the United States of America. It would be naive to suggest that the advent of Fascism is representative of one man or one woman or one administration. This moment has finally landed following decades of Reaganomics. It landed after centuries of living in a house with a flawed foundation built on slavery, stolen labor, and bloodshed; maintained through the normalization of systemic injustice. It has landed as the full legitimization of cultural homogenization, techno-militarism and life inside the atomized logic of corporatism. It has landed after the sequestering of money and political agency into fewer and fewer hands. We have become a country of red and blue: a separatist mentality that replays “the people” as demographics, driving wedges between “races,” classes, regions, genders, education levels, and worldviews.

Our values — values fought for tirelessly over the generations, values that we believe to be sacred — have proven to be as fragile as they are precious.

Facing this reality, we bear much responsibility and seize this moment of national coming-into-consciousness as an opportunity. Occupy Museums calls on our communities — in this case artists, cultural practitioners, and institutions — to directly name and confront this truth: we are living in a Fascist State. Fascist propaganda exacerbates the racism and misogyny embedded in our culture for cynical political ends; it is the enemy of art. This can be seen from the new administration’s plans to eliminate the National Endowment for the Arts — a last vestige of truly public support of the arts. Their vision of art is reduced to luxury trappings for oligarchs. Although the same financial sphere that has largely brought us to the current precipice stands behind US museums as their primary means of support, this doesn’t devalue their potency as public spaces and repositories of collective mythologies. Their civic function depends not on philanthropy but on struggle. Museums require artists, activists, and global citizens to challenge them, demanding that they hold true to their missions to serve the public, not just the 1%. That is why on #J20 we invite our communities to join us inside the museum, which we demand function as public space, to declare our common values, to make undeniable our demands, and to render our truths unmediated and unavailable for contortion, interpretation, or abstraction. Then we head out into the streets.

Occupy Museums reflects on the values behind our mission and in solidarity with all arts workers commits to continuing the struggle for the following: