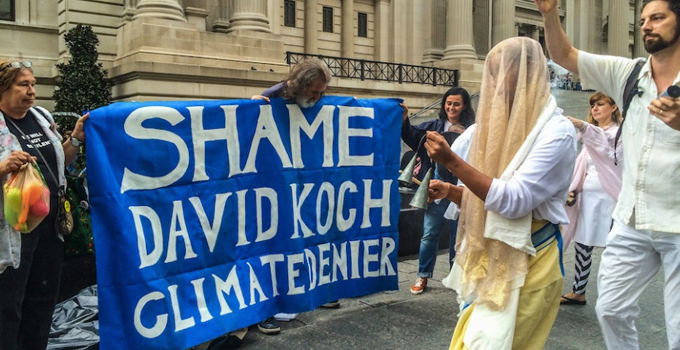 As the world prepares to converge on NYC in a mass call for Climate Justice, the Metropolitan Museum of Art will honor David H. Koch, a 4-star general in the dirty energy industry’s war against planet earth. The public space and two grand fountains in front of the Met’s facade will be renamed as the David H. Koch Plaza, following an extensive renovation.

The people will be present at the dedication on Tuesday, September 9th to stand in resistance. The celebration of this philanthropic abuse of the commons cannot pass unchallenged. People are rallying to demand sustainable policies for our culture and the ecosystem.

These fountains are boiling. The policies of The Patron contribute to the melting of the ice caps and the rising of the seas.

We invite you to join a ritual cleansing of the Place Formerly Known As David H. Koch Plaza. In a durational ceremony, we will call upon the energies of resistance, chanting and making offerings, and will collectively rename and rebrand the Plaza.

Hyperallergic article on the action

“The Metropolitan Museum is scouring away the mark of the public, banishing the working artists who sell their art outside the museum to support their artistic practices and feed their families. Koch Plaza is an intolerable affront to the hardworking people of New York who are one Koch-funded cut away from joining the City’s 66,000 homeless.

In a climate of near-total reliance on ever-more powerful plutocrats, how can free speech in public institutions flourish?

Occupy Museums proposes a project to re-common the Museum.”