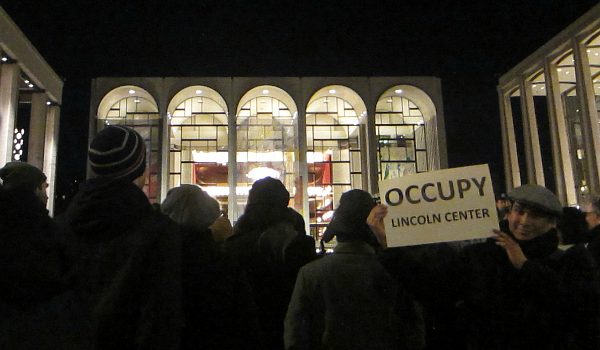 For the sixth action, we occupied Lincoln Center during their last showing of the Philip Glass opera, ‘Satyagraha.’ It was a glaringly obvious contradiction that the Lincoln Center would present an opera about the non-violent protest leaders Gandhi and Martin Luther King First, when Lincoln Center is heavily funded by David H Koch and Bloomberg LP, who is currently bent on dismantling the OWS protests, restricting freedom of speech and of the press. For this action, hundreds gathered at the police barricades all around the Lincoln Center plaza. We took off our shoes as a sign of dignity and mic checked a statement together. When the opera ended and people poured out onto Lincoln Plaza,  the opera audience was warded off from joining us by the police.  All of a sudden, the composer Philip Glass  popped up in the OWS crowd, and mic-checked a text from the opera three times.  This unified the crowd, completing the big assembly on both sides of the barricades. Many spoke including an opera singer from Lincoln Center who had been fired the day before on cutbacks. Laurie Anderson and Lou Reed were there and spoke. Finally, an autonomous OWS protester read a statement initiating his six day hunger strike, demanding that Lincoln Center open up its space to Freedom of Speech.

Occupy Museums to protest the anti-democratic policies of Lincoln Center and Bloomberg on the last performance of Satyagraha Thursday December 1, 2011 at 10:30PM.

It is no doubt timely that Philip Glass’ opera ‘Satyagraha’–which depicts Gandhi’s early struggle against colonial oppression in South Africa–should be revived by the Metropolitan Opera in 2011, a year which has seen popular revolutions in North Africa, mass uprisings in Europe, and the emergence of Occupy Wall Street protests in the United States.

Yet we see a glaring contradiction in ‘Satyagraha’ being performed at the Lincoln Center where in recent weeks protestors from Occupy Wall Street have been arrested and forcibly removed for exercising their First Amendment rights to peaceful public assembly.

It’s also a striking irony that Bloomberg L.P is one of the Lincoln Center’s leading corporate sponsors. Mayor Michael Bloomberg has stifled free speech, free press, and freedom of assembly in an aggressive campaign against Occupy Wall Street protestors in New York City that has influenced a crackdown on the protests nationally. The juxtaposition is stark: while Bloomberg funds the representation of Gandhi’s pioneering tactics of nonviolent civil disobedience in the Metropolitan Opera House, he simultaneously orders a paramilitary-style raid of the peaceful public occupation of Liberty Park, blacking out the media, while protestors are beaten, tear-gassed, and violently arrested.

Satyagraha is a Sanskrit word meaning “truth-force,” and we at Occupy Wall Street, by exercising tactics of nonviolent direct action inspired by those championed by Gandhi, have insisted that the truth be told:

Our commons have been stolen from us to profit the wealthiest 1%. We have lost homes, jobs, affordable education, natural resources, and access to public space. Our culture has been co-opted by a corporate elite. Many suffer so a few may thrive.

Previously, Occupy Museums and other OWS groups came to Lincoln Center to protest the “generous philanthropy” of David H. Koch, the funder of the Tea Party and of anti-global warming research, who uses philanthropic contributions to the former New York State Theater to whitewash his misanthropic reputation and write off his taxes. We will return again to Lincoln Center, where ‘Satyagraha’ has inspired us to once again challenge the ruthless nexus of power and wealth and reclaim our public space and common dignity.

✔A General Assembly at 10:30 PM at Lincoln Center. Join us in an open conversation about the effects of increased privatization and corporatization of all aspects of society, and the use of nonviolent civil disobedience around the world to reclaim the commons.

* Composer Philip Glass will join the general assembly and mic-check a statement.

✔If permission is not granted to protest on Lincoln Center plaza by Thursday evening, some members of Occupy Wall Street will enact a hunger strike. They will not end this strike until their demands are met, starting with the demand that Lincoln Center and the City of New York guarantee the freedoms of speech and assembly on the city-owned plazas and walkways of Lincoln Center.   Occupy Museums stand in solidarity with these hunger strikers and offer support for this courageous form of protest.

The symbolic opening of this space for protest stands for the spaces all over the city and country that we vow to liberate from the control of the 1% for the full use of the public.