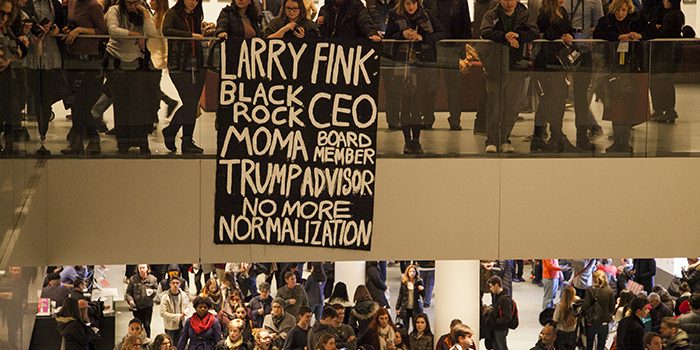 It has come to our attention that a Trump economic advisor sits on the board of the Museum of Modern Art. The name of this advisor is Larry Fink. He is the co-founder and CEO of Blackrock Inc, the largest financial company in the world.  Blackrock barely existed before 2008. Today it manages 5.1 trillion dollars of assets.  If you hold any kind of debt to any bank, chances are that its traded by Blackrock. The firm is deeply invested in Americans—and especially students to remain in permanent debt. Fink is also on the board of NYU.

Fink is not in Bannon’s camp.  He’s a liberal. He was talked about as a potential Clinton treasury secretary. But now he’s on Trump’s team. And because Trump is waging a war of hate and lies against Muslims, Immigrants, women, LGBTQ, disabled, and the planet itself, one cannot reasonably advise or do any kind of business with this regime. To advise this regime is to normalize White Supremacy.

There is a long history of activism at MoMA. In fact, tonight’s free museum entrance was brought to you by the Art Worker’s coalition protests decades ago.  So in this tradition, we are calling for MoMA to change its behavior.

We are calling for Larry Fink to be kicked off the board as a sign to your public that you care for our values of human dignity.

Why are you normalizing this regime by having a Trump advisor on your board?

Fink off the Board!